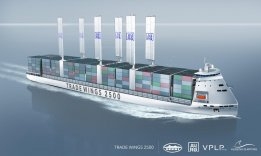 A container ship design using both wind power and LNG for its energy needs has won approval in principal (AiP) from classification society Bureau Veritas.

The Trade Wings 2,500 design has six Oceanwings sails and an LNG power plant, marine architects VPLP Design said in an emailed statement on Monday. The ship has cargo capacity of 2,500 TEU.

"Suitable to short sea shipping operations or feedering in Europe, Central America, Caribbean Islands and China, the Trade Wings 2,500 can also operate on transatlantic trades," the company said in the statement.

"The design minimizes time in port operations, as maneuverability is increased with the Pods, and the hatch coverless design further speeds up cargo operations."

The design can save as much as 35% in carbon dioxide emissions versus a comparable conventional ship.

Yet demand forecasts are more robust than ever.