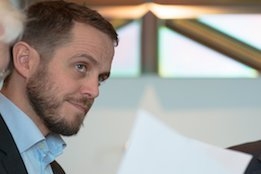 ABB, in a new video release, suggests shipping is headed for the "end of the diesel engine epoch" as the industry works toward a more cost-efficient, carbon-free future.

The news comes alongside ABB's launch of its Shipping 4.0 concept - the theme for ABB's annual customer publication, designed to encourage debate on the most prominent issues facing the industry.

"Battery cost and performance is improving continuously driving a wider adoption onboard. Also, we see that fuel cells will come to play an increasingly important role but combustion engines will likely be around for a while still, though its dominance is under threat," said John Olav Lindtjørn, Global Product Manager for Onboard DC Grid at ABB Marine and Ports.

To mark the launch of the Shipping 4.0 concept, industry leaders and journalists met with ABB experts to discuss the technologies and power sources that are shaping the maritime industry.

"We developed the Onboard DC Grid as we anticipated the important role energy storage and fuels cells have to play in the maritime sector," said Juha Koskela, Managing Director of ABB's Marine and Ports business.

"By encouraging debate around the topic and dedicating resources to these technologies, we are establishing ABB as a leading force in the green power revolution."

In response to the changing needs of the industry, ABB says it has expanded the role of Global Product Manager for Energy Storage Systems at the company to include the development fuel cell solutions.

As Ship & Bunker has previously reported, ABB notes that it supplied its Onboard DC Grid to a "futuristic" hybrid diesel-electric ferry concept, named Seasight by shipbuilder Brødrene Aa.

"What we have done so far is with zero support from the government," said Rolf Sandvik, CEO of the Fjords - the company that runs the vessel.

"We are doing it because we believe that people want a carbon-free future, and that technological advances will eventu­ally bring costs down."

The bunker unit started trading on September 15 under the name Oilmar DMCC.

The companies plan to start a feasibility study for the vessel and its hydrogen supply from this month.

EMSA to Expand Sniffer Drone Use to Monitor Ship Emissions

But uncertainty lingers over exact plans due to pandemic.