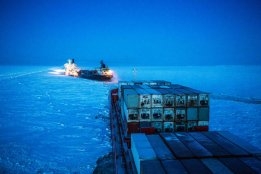 Russian metals producer Norilsk Nickel has ordered a hybrid diesel-LNG icebreaker to support its shipments along the Northern Sea Route.

The firm has signed a preliminary agreement with Rosatom and the Far Eastern Shipbuilding and Ship Repair Centre to design and build the ship, it said in a statement on its website last week.

The company carried more than 1.5 million mt of cargo along the Northern Sea Route last year.

The three companies will form a working group that will be expected to develop a draft contract for the vessel's design and construction by the middle of next year. The new icebreaker will replace Norilsk Nickel's Taimyr-type vessel, which will be decommissioned in 2027-2029.

"The icebreaker fleet is the flagship of large-scale modernisation of transport infrastructure in the Norilsk Industrial District," Vladimir Potanin, president of Norilsk Nickel, said in the statement.

"Nornickel is increasing the volume of traffic to efficiently implement strategic investment projects in the region.

"The new icebreaker will help the company to meet its ambitious goals, and the agreement will serve as an important step in building partnerships between leading Russian companies in the development of the Arctic."

The firm is also considering taking on another nuclear-powered icebreaker once the current generation is retired.

The company has become a partner in the Linking Carbon Capture and Storage (LINCCS) consortium.