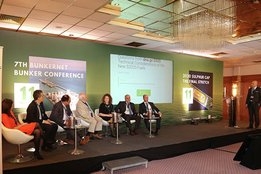 The start of the new global sulfur cap may be getting closer, but clarity on key issues including the price and quality of the new 0.50%S low sulfur fuels is not getting any clearer, delegates gathered at the 7th Bunkernet Bunker Conference have heard.

In terms of pricing, Platts’ Eleni Pittalis noted that while the first contracts for 0.50% sulfur bunkers are being made and this has helped establish some initial price differentials, these are likely to change over the next six months as traded volumes increase.

And with distillates set to play a much larger role in the post-2020 marine fuel makeup, Pittalis warned prices could also change due to shifts in refining and demand by factors outside of the marine fuel sector.

There seems to be a better understanding of what the quality of the new bread of IMO2020 fuels will be, with Naeem Javaid, the Global Operations Manager FOBAS at Lloyd’s Register, saying trials on board ships are ongoing and, while not without issues, are generally doing well.

Unfortunately at this time the analysis of the new blends is not in the public domain, and he warned the currently positive picture may also change as more suppliers begin to blend new products as IMO2020 draws closer.

The conference’s agenda also covered various other 2020 focused matters, including technical considerations as well as the emergence of alternative marine fuel solutions.

The event, delivered as a partnership between the International Bunker Industry Association (IBIA) and Bunkernet was attended by some 150 participants. It took place last week at the Grand Resort Limassol, Cyprus.

In his inaugural address, Bunkernet General Manager, Nicholas Argyrou, stressed the importance of such events as a way to address new industry challenges.

The purpose of the role is to manage, continuously develop and motivate a team of 8-10 ambitious Bunker Traders in their Singapore office.