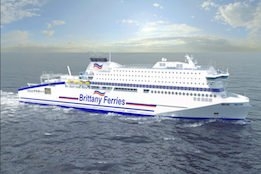 The company says the vessel will be "the most environmentally friendly ship regularly operating in UK waters.

"Compared with diesel fuel, LNG emits less carbon dioxide during combustion and burns with no smoke. It is entirely free of sulphur and produces very low emissions of nitrogen oxide and particulate matter," added Brittany Ferries.

The Honfleur will be built at the Flensburger Schiffbau shipyard in Germany, and is slated for operation in 2019 alongside Brittany Ferries' Mont St Michel on three daily return sailings.

"The significant investment we are making reflects our on-going commitment to developing the regions in which we operate, to linking people and to reducing the environmental impact of our ships," said Jean-Marc Roué, Brittany Ferries' president.

The Honfleur... is slated for operation in 2019

"Despite the challenges of Brexit we remain confident in the future and our first new ship since the delivery of Armorique in 2009, with a budget of around £175m ($221.53 million), underlines this resolve."

Brittany Ferries' notes that the latest order follows the completion initiative that saw the installation of exhaust gas scrubber systems across six of the company's 10 vessels.

Demand for biodiesel in the US bunker market has been 'minimal' so far this year, according to Bunker One USA and Hartree Partners.

Marine lawyer tells London seminar that climate change litigation is on the rise.