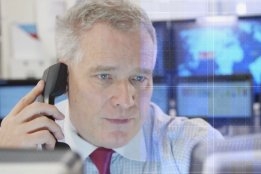 OceanConnect Marine recently announced a major revision to its online bunker purchase platform to make it "IMO 2020 ready". But what has changed exactly?

Back in 2016 Ship & Bunker spoke with Ethan Ram, OCM's Chief Operating Officer, about the online platform, AuctionConnect, and its origins - readers looking for a more in-depth look at the company and platform's history can find that by clicking here.

With the launch of the new platform, we caught up with Ram and OCM's Group M.D., S.I. Shim, to better understand its new features.

Suffice to say OCM has the world's most established online bunker purchase platform and has been serving customers since 2000. This is an incredible achievement given the other online efforts that have come and gone in that time, and even more so given many readers would likely struggle to name a single one of those now forgotten ventures.

OCM's platform has always been, and remains, a reverse auction. Or as OCM calls it, "the Ebay for bunkers".

The major difference is that prices go down with each bid, not up, as buyers look to get the best deal.

"Our system brings buyers and suppliers together online and the process follows a traditional fuel procurement process. Buyers log in to their account on the site, specify their fuel requirement - product, quantity, location - and invite physical suppliers to participate in an online auction," Shim explains.

"Usually the auction is scheduled up to a week ahead of time. The supplier receives the invitation and confirms if they will attend. On the relevant day and time of the auction, the buyer and suppliers log in and go to the auction. Bidding starts and prices go down until no supplier is willing to offer a lower price. The Buyer then decides which bid to accept and confirmations are sent."

Over the years, millions of tons of online fuel transactions have now been completed this way, he adds.

OCM makes money from the platform by acting as the broker for each deal, earning a brokerage commission for each completed transaction in the same way as commissions it makes as part of its traditional global bunker brokerage service.

Ram says key changes that have been made are all a result of customer feedback, including general improvements to the workflow and UI.

"We have upgraded how the site looks and works, making it more current and most importantly, making it easier for users to navigate, setup and manage auctions, access reports, and participate in multiple auctions at once," he says.

"We enhanced the reports which are easier to access, making internal reporting and record-keeping requirements much faster."

Perhaps most importantly for many users today is the site can now be accessed from any mobile device.

OCM has added a number of new features especially for suppliers, including something it calls "Autobiding".

"Until now suppliers have had to actively bid in each auction, which can be time consuming. With Autobiding, also known as proxy bidding, suppliers can instead enter both a starting and lowest price they are willing to sell at," Ram explains.

If the Supplier’s credit line for a buyer is fully utilized, or is not setup, the Supplier can sell ‘for the account of OCM

"Once the auction begins, rather than manually monitoring and continuously biding during the process, the system will begin bidding at the starting price but then automatically respond to rival bids with lower bids made in set increments. This continues up until the Supplier's best (lowest) price has been reached. If at any point during this process there is no other supplier willing to bid at lower price, the bid is won at the last bid level."

Another IMO2020-focused change is with credit, which for next year is expected to come under major pressure due to the higher cost of IMO2020 compliant low sulfur fuels.

"If the Supplier's credit line for a buyer is fully utilized, or is not setup, the Supplier can sell 'for the account of OCM. The price they bid includes a pre-agreed margin that OCM makes on the sale to the Buyer," says Shim.

If a traded bid wins, the Supplier issues the invoice to OCM and OCM invoices the Buyer, as with any other traded deal.

when a single supplier is unable to satisfy the entire requirement, buyers can now indicate they are willing to split the delivery for the multiple products

And when a single supplier is unable to satisfy the entire requirement, buyers can now indicate they are willing to split the delivery for the multiple products. Suppliers are therefore able to offer just the products they have available to sell.

If there are multiple split delivery options available, the platform will highlight the most favorable combination for the buyer.

In addition to individual stems, buyers can also set up actions for suppliers to bid on a term contract basis.

Finally, to help streamline the auction process and to ensure that the nomination includes barges that are acceptable to the buyer, they can now pre-approve supplier's barges at any time prior to the start of the auction.

Who is it For?

Any buyer or supplier can use OCM's platform for either spot or contract requirements in any port. But given that a bidding process is core to the paradigm, Ram says it works best in markets where there are more than three suppliers competing with regular avails.

Transparent price discovery and auditable records are also a key part of the system, so buyers placing value on these features will see benefit from using the platform.

"OCM's AuctionConnect is the longest running and most used system in the market. More than 1 million MTs have been transacted on our site each year for the last 15 years. With the latest changes to the platform for IMO2020, we can expect this success to continue for many more years to come," Shim concludes.

Further details on the new platform can be found here: https://www.oceanconnectmarine.com/#auctionconnect

Some business may be driven away to Colombo and Singapore, according to one supplier.