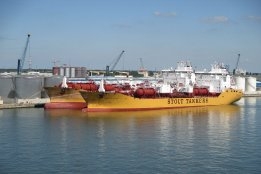 The trial is set to take place on board the 37,000 DWT chemical tanker Stolt Inspiration on a voyage from Rotterdam to Houston. Bunkering for the trial was completed at the end of last week at the Port of Rotterdam.

Following in the footsteps of several other owners, the biofuel for the trial as been supplied by producer GoodFuels.

Drop in biofuels, such as those produced by GoodFuels, are extremely attractive to the shipping industry as they are a like-for-like replacement for regular oil bunkers, so require no modifications to the vessel for use.

However, compared to their fossil fuel equivalents, GoodFuels says their biofuels have the potential to deliver a well-to-exhaust CO2 reduction of between 80 and 90%.

the trial will assess the viability of biofuel use in both engines and boilers, and will test the fuel’s impact on consumption, power, and reliability

Like many of their peers, Stolt Tankers says the trial will assess the viability of biofuel use in both engines and boilers, and will test the fuel’s impact on consumption, power, and reliability.

“I am excited to see the results of the trial.” Said Lucas Vos, President Stolt Tankers.

“This is just one of the areas that we are exploring as the industry moves towards a carbon-neutral future. We are committed to working with other leaders to explore innovative technologies including biofuels, hydrogen, wind, ammonia and methanol, to reduce our environmental footprint, while continuing to provide customers with the high quality service they expect from us.”

Historically, one of the biggest barriers to biofuel use has been cost.

With growing interest in biofuel driven by the industry's necessity to reduce its emissions footprint, economies of scale are the main factor behind reducing the premium to oil bunkers.

The firm is looking for candidates with three to five years' experience in the bunker industry.

The new hire had served at DFDS for almost eight years, most recently as head of direct procurement and previously senior manager for bunker procurement.

The company reported oil trading and bunkering profit of $7.612 million for 2020.