INTERVIEW: The Falling Cost of Biofuel - Now a "Commercially and Technically Viable" Alternative to Fossil Bunkers 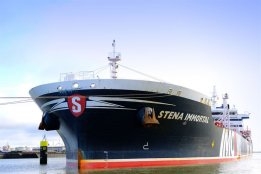 The Stena Immortal underwent a trial of the GoodFuels product for ten days from late March. Image Credit: Stena Bulk

The price of GHG-footprint reducing biofuels has declined to the extent where they should now be considered both a commercially and technically viable alternative to conventional bunkers, even as the price of oil slumps to multi-year lows, according to supplier GoodFuels.

For the past several years GoodFuels has been the supplier behind a series of successful biofuel bunker trials, but historically it is price that has been one of the key barriers to their wider adoption.

Not only has this been many multiples higher than conventional oil bunkers, but understanding the cost for buyers is complicated by government subsidies for the fuel that vary significantly from country to country.

This is a commercially and technically viable product, and this combination makes it an attractive product.

Amid rising interest in the products as the shipping industry attempts to cut its carbon footprint ahead of the IMO 2030 and IMO 2050 GHG reduction targets, the good news for prospective buyers is that the cost of biofuel has fallen substantially.

"The days of three to four times the price of regular fossil fuels seem to be behind us," Isabel Welten, chief commercial officer for GoodFuels, told Ship & Bunker in a recent interview.

"Especially with the launch of the Bio-Fuel Oil, GoodFuels has been able to make this price premium significantly lower."

The premium is now at 'small percentages' more than conventional bunker fuels, according to GoodFuels CEO Dirk Kronemeijer, rather than being several times the price.

Economies of scale are the main factor behind reducing the premium to conventional bunkers, according to GoodFuels.

"We are trying to get the huge scaling wheel up and running," Kronemeijer said.

We are trying to get the huge scaling wheel up and running.

"Already this year, we feel very proud to have launched the first dedicated bio-bunker barge in the world, doing nothing other than our bio-bunker deliveries."

Demonstrating the quality and technical performance of their product is also one of the company's main aims.

"If you compare to what sort of fossil properties people put into their ships, to some extent our quality is so much better than the fossil equivalent," Kronemeijer said.

"That is also an important notion -- it is not that you are diminishing standards when you use biofuel; on the contrary, you often get much better results."

While some in the past have questioned the the commercial viability of biofuel for marine use, the fact is today the demand for modern biofuels appears to be growing rapidly in the shipping industry.

Last month the Port of Rotterdam said 11% of its fuel oil sales in the first quarter were of fuel blends that included at least some biofuels -- up from 3% of sales in the fourth quarter of 2019. The port has previously said the figure covers blends with conventional oil that contain between 5% and 50% biofuel, with most falling around the 20-30% mark.

Welten said GoodFuels has seen forecasts that "could make sense" putting biofuels' share of the global bunker market at 10-15% by 2030.

"At the core, it is still quite a conservative industry, it takes time," Kronemeijer said.

"We have been working on this concept since 2015.

"And the good news is that, despite COVID-19, you see the growth every year getting bigger and bigger."

The International Maritime Organization has committed the shipping industry to cutting its carbon emissions per tonne-mile by at least 40% from 2008's levels by 2030, and halving its total greenhouse gas emissions by 2050.

The big advantage of biofuels versus other alternative fuel technologies is of course the drop-in characteristic.

Interest in the use of biofuel bunkers has increased significantly over the last year as they are seen as a promising route for the industry to meet these targets.

Maersk, CMA CGM, and NORDEN last year were among the names to trial biofuel blends, while most recently Stena Bulk completed a ten-day trial of a 100% biofuel product on board one of its ships in late March.

"I think GoodFuels has successfully managed to prove that this is a commercially and technically viable product, and this combination makes it an attractive product," said Welten.

The impact of such a trial and especially with big names such as Stena Bulk, is that a lot of parties read about it; they see that the market is ready for it."

For the GoodFuels "MR1-100" fuel used in Stena Bulk's trial, the company says the product lowers carbon dioxide emissions around 83% compared to conventional bunkers if considered on a full life cycle perspective that includes the production and distribution of the fuel.

"The big advantage of biofuels versus other alternative fuel technologies is of course the drop-in characteristic," Kronemeijer said.

"You do not have to invest in refurbishing your ship, and you have the power to decide whether the ship is going green or maybe back to fossil, or if it needs to go to Africa where there is no supply at all.

"This is of course a strong advantage in this energy transition."

Singapore Bunker Demand Rallies in May

The city-state's total demand advanced to 4.1 million mt in May.