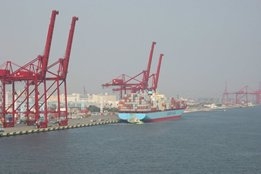 Maersk is the latest carrier to announce it will trial carbon-neutral bunkers in what looks to becoming a growing trend for shipowners.

In Maersk’s case, the firm says it is using a blend of used cooking oil which this year has been tested and successfully validated in a trial involving the Dutch Sustainability Growth Coalition (DSGC) and Shell.

“The biofuel trial on board Mette Maersk has proven that decarbonized solutions for shipping can already be utilized today, both technically and operationally, “explains Søren Toft, Maersk COO.

“While it is not yet an absolutely final solution it is certainly part of the solution and it can serve as a transition solution to reduce CO2 emissions today. With the launch of this product, Maersk seeks to help our customers with their goal of moving to sustainable supply chains.”

Fast-Fashion multinational H&M Group has been named as the first company to participate in Maersk’s trial.

The carrier follows in the footsteps of DFDS, CMA CGM in partnership with IKEA, and NORDEN who this year have all also announced trials using carbon-neutral biofuel bunkers.

The question for bunker suppliers is whether carbon-neutral biofuel bunkers could cause an upset to traditional bunker supply markets.

While this seems unlikely in the short term, if trials such as those by Maersk are completed successfully then ultimately cost will be the only major barrier to carriers consuming higher volumes of carbon-neutral bunkers.

Given that big business today has plenty of incentive to showcase their green credentials, passing that cost on to customers might be easier than it’s ever been.

Last year the industry was preparing for a $4 billion jump in annual bunker costs. What it got was a 2020 with marine fuel prices at their lowest for several years.

It is highly likely that stringent wash water monitoring guidelines will be ratified in the near future, writes Chelsea Technologies' Elizabeth Paull.