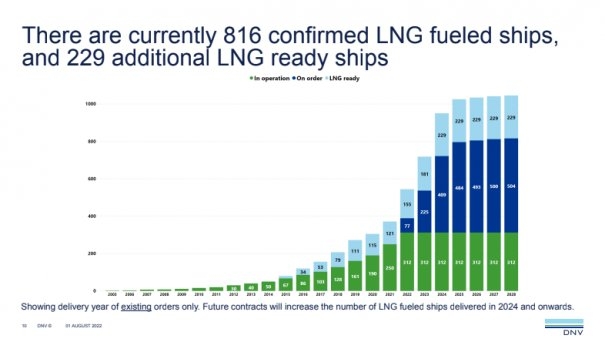 So far in 2022 a total of 162 LNG-fuelled vessels have been ordered. Image Credit: DNV

A total of nine LNG-fuelled vessels were ordered globally in July, according to classification society DNV, down significantly from the numbers seen a year ago but with several large orders coming up.

The nine orders in July compares with six in June and 21 in July 2021.

So far in 2022 a total of 162 LNG-fuelled vessels have been ordered, DNV said in an emailed statement on Tuesday. 52% of these orders have been for container ships and 25% for car carriers.

"Although the growth in orders has slowed down somewhat in line with the general newbuild ordering activity, there are several large orders in the pipeline," Martin Wold, principal consultant in DNV's Maritime Advisory Business, said in the statement.

"These types of projects are key to driving technology maturity and establishing safety frameworks, and to accelerating the decarbonization of shipping."

The port authority has decided against proceeding with previously mulled plans to implement a licensing system for conventional bunker fuel supply.

Meanwhile, G-7 wants a heavier buy-in before following through on gas cap.

US West Coast ports took just 45% of the imports total in August.