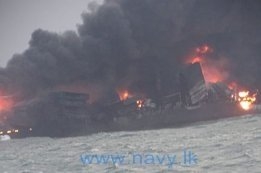 Container shipping company X-Press Feeders has paid some initial compensation to Sri Lanka's government over the sinking of one of its ships in their waters last month.

The company has made 'an initial payment' of $3.6 million through its insurers to Sri Lanka, it said in a statement on its website on Monday.

The X-Press Pearl sank in June two weeks after a fire hit the container ship.

The ship was carrying 278 mt of fuel oil and 50 mt of marine gasoil in its bunker tanks.

"Discussions are ongoing on the payment of further claims and all legitimate claims will be considered," the company said in the statement.

"We continue to contribute to the clean-up and pollution mitigation efforts, having flown in additional oil spill response assets on a chartered flight from Malaysia in response to a request from the UN-EU team in Colombo."

The port authority has signed a memorandum of understanding with PT Pertamina Patra Niaga to set up bunker supply in the Sunda Strait and other Indonesian waters.