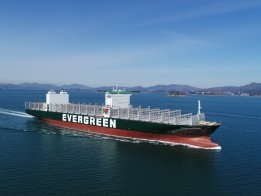 The ship was delivered on October 30. Image Credit: Evergreen

The 12,000 TEU Ever Fortune was delivered at the Geoje Shipyard of Samsung Heavy Industries on October 30, the company said in a statement on its website.

The ship has now completed its first cargo loading at Ningbo and Xiamen, and was scheduled to take on further cargo at Kaohsiung, Hong Kong and Yantian before beginning its inaugural voyage across the Pacific on November 14.

The ship is the fifth of eight ordered from Samsung in 2018, and the sixth is due to be delivered in December, Evergreen said.

Shell supplied the vessel, supported by the Italian Coast Guard, the Port Authority of the East Ligurian Sea and other local authorities.

His role will be to "optimize Bunker Holding's market leader position by supporting the Group's continued efforts to consolidate the international bunker industry."

Mercuria, Vopak, Brookfield and Prostar Capital have been named as potential suitors.