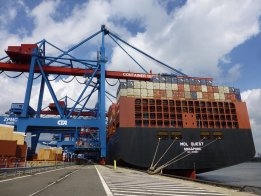 Box ship operator Ocean Network Express (ONE) is to fit emissions abatement technology onto ten of its vessels, an executive from the company has said.

CEO Jeremy Nixon, who was speaking at a shipping event in Singapore, said some of its owned ships would be equipped with scrubbers when in dry dock while short-term chartered vessels would come with the equipment already installed.

The executive said his company was no great fan of scrubbers.

"We will not take core vessels out of operation to fit scrubbers," Nixon was quoted as saying by maritime news provider Lloyd's List.

Looking ahead, Nixon said that when ordering newbuildings, technologies -- as in whether to use natural gas bunker fuel or install scrubbers -- are becoming an increasing important part of the investment decision.

ONE comprises the box shipping arms of Japanese shipping companies, NYK, MOL and K Line and controls over 200 ships.

In an interview with Ship & Bunker last month, Stena Bulk managers Peter Björkborg and Lars Malmbratt set out their company's view on the alternative fuels agenda in a time of low conventional bunker prices.

Container shipping has been heavily affected by the economic shock from the crisis, with a large slice of global capacity left idle last month.

TFG Marine to Join Singapore Bunker Market at Start of May