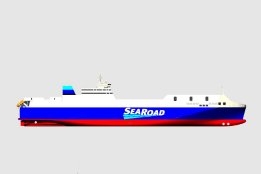 Tasmanian-based operator SeaRoad has chosen LNG to power a newbuild Ro-Ro it has ordered from German yard Flensburger Schiffbau-Gesellschaft (FSG) in a deal said to be worth in excess of 100 million euros ($117 million).

The 210 metre vessel will comprise 3,792 lane metres for freight units, plus capacity for over 100 trade vehicles, FSG said in a press release issued today.

With delivery set for Q4 of 2023, the vessel will operate on Bass Strait between Devonport, on the island of Tasmania, and Melbourne, Victoria on mainland Australia.

Neither FSG or SeaRoad directly commented on the decision to use LNG rather than conventional bunkers to power the vessel, but the order comes amid increasing adoption of alternatively powered tonnage as the industry looks to improve its environmental footprint.

The latest data from Society for Gas as a Marine Fuel (SGMF) indicates there are currently 210 LNG-fuelled ships in operation and a further 374 on order.

"With this new vessel, FSG and SeaRoad will make an important contribution to sustainable shipping,” said FSG CEO Philipp Maracke.