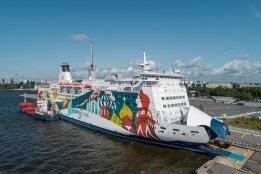 The firm has already sold its first 10,000 mt batch of the Moscow product to customers in St Petersburg. Image Credit: Gazprom Neft

The firm has already sold its first 10,000 mt batch of the product to customers in St Petersburg, it said in a statement on its website on Thursday.

Previously the company was only producing VLSFO at its Omsk refinery and its fuel terminals at St Petersburg and Novorossiysk.

The firm is seeking to produce 100,000 mt from the Moscow facility by the end of this year.

"Gazprom Neft was one of the first in Russia to bring to the market low-sulfur marine fuel that meets global environmental requirements," Anatoly Cherner, deputy board chairman at Gazprom Neft, said in the statement.

"Due to their high quality and optimal recipes, our products are in stable demand and are supplied to most Russian ports.

"The development of the production of new hybrid fuel by the Moscow Oil Refinery, following the Omsk Oil Refinery, gives us the opportunity to optimize logistics and expand the geography of sales, thus providing the Russian maritime transportation market with additional volumes of high-quality domestic product."

The two companies will collaborate to supply fuel oil at ports across Malaysia.