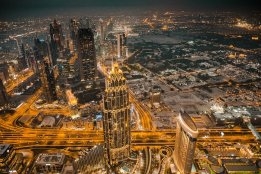 GP Global is based in Dubai. File Image / Pixabay

Middle East-based GP Global, which is in the middle of a restructuring process after an alleged fraud among some of its employees was uncovered, is not currently in discussions to sell any part of its business, according to a source familiar with the situation.

The company's discussions with lenders are still ongoing, and it has not reached the stage of discussing asset sales with other parties, according to a source familiar with the situation.

But at the same time, it is incorrect to say that the company has ruled out discussions of this type, as has been reported elsewhere, the source said.

GP's bunker business has been largely paused as the company seeks new backing from its lenders.

Some previously arranged stems are still being carried out, but the company has been advised against taking on new business for now while its balance sheet is under review, it said earlier this month.

A trader for the company told Ship & Bunker this week that staff were still being paid and told to wait for new developments.

The MURELOIL 7500 HT will have both diesel and battery propulsion, allowing it to produce zero emissions while in port.

Move will add to growing green hydrogen market, according to company.