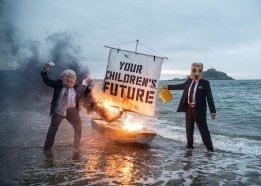 OR highlights bunker fuel/pollution link ahead of G7 summit.  Image Credit / OR

Activists from environmentalist group Ocean Rebellion (OR) are aiming to highlight the issue of oil-derived bunker fuel at next week's G7 summit.

The summit, which is being held in the southwest corner of the UK, has triggered a high level off security with a special ship chartered by the UK government to house the extra personnel. 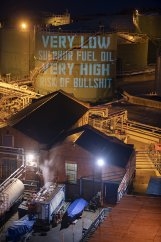 Once docked, "it will still run its auxiliary engines" and cause more pollution, he was quoted as saying.

The group has targeted cruise ships moored off the UK's southern coastline by adorning their hulls with light-generated slogans.

OR wants a total ban on heavy fuel oil and overhaul the International Maritime Organisation, the UN body which oversees shipping.

OR is a loose grouping of activists with a base in the Cornish port of Falmouth.

The company is looking for candidates with two to five years of experience in analytical positions within finance, business controlling or equivalent areas.

"We do not see LNG bringing the necessary carbon reductions, and it is still a fossil fuel."

MSC Restarts UK Cruises From May 20

The first cruise will start on May 20.