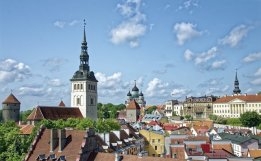 The new hire is based at the firm's Tallinn headquarters. File Image / Pixabay

Eva Kozak joined Arte Bunkering as credit risk manager at the company's headquarters in Tallinn in February, according to an update to her LinkedIn profile on Monday.

Kozak was previously credit manager for KPI OceanConnect in Hamburg and for Bunker Holding in Dubai.

Arte was founded in Tallinn in 2010 with an initial focus on the Russian and Baltic markets.

In an interview with Ship & Bunker in December Seka Tkachenko, the company's commercial manager, said it had engaged in an international expansion partly as a means of diversifying from the Russian ports, where the IMO 2020 transition significantly accelerated a longer-term decline in bunker volumes.

MARITEC: Update on Chemical Contaminants in Fuels From ARA Region

Since the last alert on Chemical Contaminants in Fuels from ARA Region (Amsterdam, Rotterdam & Antwerp), CTI-Maritec has kept a close watch on the fuel quality in the region.

Oil Sinks To The $80s As Demand Fears Intensify

But the Saudis boost oil prices to record level for Asian customers.