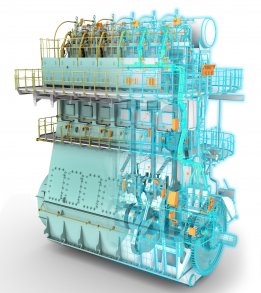 WinGD will supply its hybrid energy systems for the vessels. Image Credit: WinGD

The four vessels will primarily run on LNG, supplemented by battery power, WinGD said in an emailed statement on Wednesday.

The ships are under construction by China Merchants JinLing Shipyard for delivery in 2023, and will then be used to transport vehicles between Europe and the Middle East.

"Based on its in-depth knowledge of the main engine's performance WinGD has optimized spinning reserves, peak shaving, and energy flow to run the main engine constantly at its sweet spot while avoiding inefficient generator loads," WinGD said in the statement.

"WinGD will be responsible for the system integration and system-level energy management, through WinGD's new Hybrid Control System."

Port captain notes demand for heavy fuel and LNG but not alternative fuels.