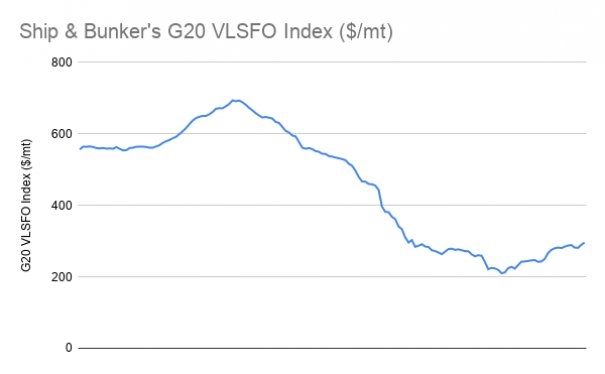 A hedging programme could have taken the edge off much of the recent volatility in bunker prices. Image Credit: Ship & Bunker

The bunker market is being advised to take on more hedging to protect itself from volatility as prices start to rise again.

Ship & Bunker's G20 index of prices at 20 leading bunker ports saw its first monthly gain since December in May, and was at a 10-week high of $296/mt on Tuesday.

While this rally may yet prove short-lived, shipowners may be faced with a rapid jump in their expenses if they have no hedging in place to soften the impact of market volatility.

"In late April if a shipowner fixed an end-May cargo requiring 1,000 mt of bunkers, they would have taken a $90,000 hit on their voyage profit," Ishaan Hemnani, founder of bunker brokerage BunkerEx, wrote in an emailed note Tuesday.

"A simple bunker hedging strategy would have avoided this and maintained the originally intended P&L."

BunkerEx recommends the use of fixed forward prices published on its trading screen to lock in future prices without needing to pay up front.

In comments to maritime news provider TradeWinds last week Daniel Rose, chief executive of LQM, said smaller companies had traditionally been hesitant to engage in hedging because they were less certain than larger players about what their future bunker requirements might be.

But the company is starting to see an increase in hedging activity because of the current market conditions, he told Ship & Bunker Wednesday.

"We are seeing increased volumes of price risk management related business because volatility is high and prices are low," Rose said.

"In many ways, there has never been a better time for buyers of marine fuels to look into these mechanisms."

There has never been a better time for buyers of marine fuels to look into these mechanisms.

Expectations are rising that OPEC+ is about to extend its current production cuts for another two months at the same time as COVID-19 lockdown measures are starting to be eased in many parts of the world, which may lead to a strong rally in crude prices.

In a survey of LQM's clients last month, two-thirds said they thought prices would rise over the next 12 months, but only half said they had risk management strategies to mitigate this risk.

While hedging could be useful now for buyers warily eyeing up a potential sharp rally over the coming months, it might also have been a good idea for those holding large quantities of product earlier this year before the collapse in crude cut the value of their stored oil.

A lack of hedging against the price drop looks to have been a significant factor in the recent troubles of Singapore-based trader Hin Leong. Both Euronav and Hapag-Lloyd have reported tens of millions of losses from apparently carrying unhedged product before the price drop, while Star Bulk recently reported some successful hedging of the spread between high- and low-sulfur bunkers during the collapse.

"I think it's really interesting to look at why so many companies have been unhedged with this COVID-19 crisis, and I think it comes down to the basic fact that a lot of companies have been making super profits in the preceding months," Paul Hardy, head of business development at brokerage NSI, said in a webinar hosted by Ship & Bunker last week.

"The main reasons were logistics were in flux with the switch over of product types from high sulfur to low sulfur, and also the market was opaque."

The rapid collapse in prices from March left a range of problems for those unprotected against the volatility, Hardy added.

"Trending down is where we get the severe problems; those unhedged on the supply side are left horribly exposed in the short term, and those that bought and sold forward through forward fixed price contracts are exposed over a long period," he said.

Trending down is where we get the severe problems.

Taking on hedging more universally could be one of the ways in which the bunker industry modernises to look more like other parts of the transport sector, according to Ishaan Hemnani of BunkerEx.

"Whilst other transportation industries, for example airlines, hedge over 60% of their fuel exposure, why do most shipping companies choose not to hedge?" he said.

"Hedging is not speculating; it is about removing uncertainties from the bottom line."

Dangers of Hedging for Inactive Assets

But NSI's Paul Hardy disagrees, arguing that some of the aviation industry's hedging may not necessarily be advantageous for it.

"Hedging is speculating if it does not cover an underlying physical position," he told Ship & Bunker Wednesday.

"If you look at the airline industry, then the hedges they have made are like a ticking time bomb with planes grounded and none burning jet fuel.

"The same goes for ships laid up and no longer burning fuel. If they have hedges in place at numbers higher than the spot market then there is also possibility for default and/or catastrophic losses.

Traders' fears of more lockdowns clash with signs of full recovery regardless.