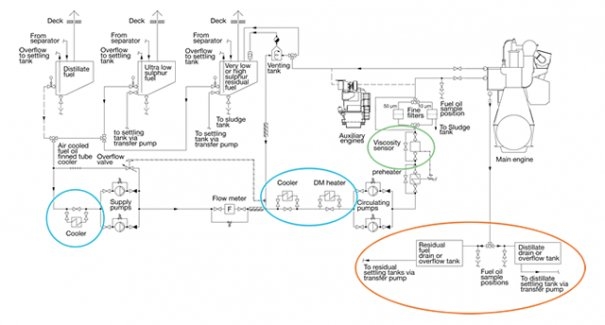 After years combating corrosion caused by sulfur in fuel, might chief engineers miss sulfur when it's gone (or at least dramatically reduced) next year? That seems to be the message from MAN Energy Solutions, which is advising ship operators to install new piston rings on its two-stroke engines to prevent cylinder damage by low-sulfur fuels.

The concern stems from the role that MAN sees sulfur in fuel playing in protecting cylinders.

a little sulfuric corrosion could actually be a good thing

In recent years the ultra-long stroke of modern engines – introduced to meet tightening energy efficiency and NOx restrictions - has increased pressures and reduced temperatures in cylinders. The result has been sulfuric acid condensation on cylinder liners, better known as cold corrosion. To protect against this, lubricants with a much higher alkalinity are used in modern engines burning high-sulfur fuel.

But a little sulfuric corrosion could actually be a good thing. According to a service letter distributed last year, MAN noted that "the sulfuric acid formed during the combustion… will ensure a controlled amount of corrosion. This causes the liner surface to sustain an adequate level of wear."

The engine designer argues that wear is needed so that liner surfaces are rough enough to hold cylinder oil, which prevents cylinder rings from damaging the liners by metal-on-metal abrasion. So, MAN has a Goldilocks problem - too little sulfur in fuel as well as too much can pose challenges for cylinder condition. The company's solution is to recommend piston rings with a ceramic-metal (or cermet) coating for engines burning fuel with sulfur below 0.5%. These are already being installed on new engines and should be retrofitted to older models.

While engine designers differ on the impact of lower sulfur on engine condition, they agree that VLSFO's remaining characteristics will not have a big impact on engine performance.

The role of sulfur-induced wear in controlling the cylinder condition - and the need for costly piston ring retrofits - is emphatically rejected by Winterthur Gas & Diesel (WinGD). Research and development director Konrad Räss points to the many thousands of hours of unproblematic experience already gained on low-sulfur fuels in emission control areas, and in the case of gas-burning engines, on near-zero sulfur fuels.

"Since the first WinGD dual-fuel engines started to collect operational experience in 2016, it has become apparent that the currently applied engine design is also suitable for operation with a fuel that contains virtually no sulfur," says Räss. "Feedback received from lubricant suppliers about tests with 0.50% sulfur fuels on WinGD engines further confirms that currently no issues with engine design have been flagged. However, there is still room for improvement regarding cylinder oil detergency; but this is a general issue, not only linked to 2020 compliant fuels"

While engine designers differ on the impact of lower sulfur on engine condition, they agree that VLSFO's remaining characteristics – including compatibility and combustion qualities – will not have a big impact on engine performance.

Räss notes: "Irrespective of sulfur content, viscosity and other properties, a fuel compliant with the ISO 8217:2017 specification will likely not impact negatively on the performance of WinGD engines. The design includes decades of operational experience using various fuel types with a wide range of sulfur contents and physical properties. This experience will ensure trouble-free operation with VLSFO."

MAN's Jacobsen agrees. The company presented the results of an investigation into VLSFO fuel characteristics and engine tests using these fuels at CIMAC World Congress in June. While the investigation highlighted the widely ranging fuel qualities among VLSFOs - including viscosity, density, cat fines content and cold flow properties – engine tests confirmed that all the fuels could be burned safely and reliably.

In one part of MAN's analysis, the company looked at the combustion of high-density aromatic fuel – a refinery stream that is not currently used for marine fuels but could be considered as part of a VLSFO blend. Jacobsen described HDA as the worst-burning fuel that could be isolated.

"HDA should be regarded as a worst-case scenario," she says. "If the engine can operate on HDA, it should also be able to operate on all future VLSFO blends."

The HDA fuel featured too high a density to meet either the 2017 or even 2005 versions of ISO 8217. Similarly, its density to viscosity relationship as described by the calculated carbon aromaticity index was too high for the 2017 standard. As expected from these characteristics, in lab tests the fuel burned slower and ignited later than other fuels.

The ignition delay was observed in trials using HDA in MAN's test engine in Copenhagen. But the engine burned the fuel acceptably at all engine loads. The company concluded that fuels with lower ignition quality do not influence overall engine performance negatively.

"Engine testing and service experience has shown that MAN two-stroke engines are capable of long-term operation on fuels with lower ignition quality," says Jacobsen. "The many different types of VLSFOs might challenge the ship installations and the handling of the fuel on board, [but] MAN two-stroke engines can operate on these fuels."

With engine designers confident that they can handle whatever VLSFOs throw at them, the focus for ship owners and operators will be the auxiliary fuel system around the engine. Jacobsen highlights the need for adequate separation of potentially incompatible fuels as well as measures for cooling to increase viscosity of more distillate-like blends. But lack of agreement over the impact of low-sulfur fuels on cylinder condition will give operators pause for thought, highlighting the many potential pitfalls awaiting them as 2020 nears.

Hapag-Lloyd to Bunker LNG in Singapore and Rotterdam wth Shell

6 LNG newbuilds ordered last month and 1 conversion to complete this month; too early to decide on any more gas-fuelled orders or conversions.