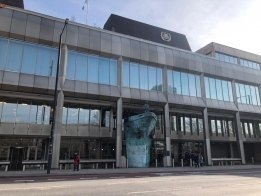 Meetings at the IMO's headquarters in London have been indefinitely postponed during the COVID-19 pandemic. Image Credit: Ship & Bunker

Despite the dramatic change in economic outlook brought about by plummeting oil prices and measures to counter the Covid-19 pandemic, any weakening of the International Maritime Organization's (IMO) 2030 and 2050 targets for decarbonisation is highly unlikely, according to one of the key officials involved in drawing up the initial strategy.

The IMO's initial strategy envisages a drop of at least 40% from 2008's levels in carbon emissions per transport work by 2030, and a reduction in total greenhouse gas (GHG) emissions from the shipping industry of at least 50% by 2050.

The shipping industry should not expect the strategy to be watered down in the run-up to its review at the IMO in 2023, according to Edmund Hughes, the UN body's former head of air pollution and energy efficiency.

"I just can't see that now," he told Ship & Bunker in an interview last month.

"Prior to COVID-19 there seemed to be an acceleration, particularly with the likes of the European Union announcing their Green Deal.

"I really don't foresee any weakening of those goals."

The European Commission has already committed to including shipping in its emissions trading scheme, and is expected to announce more details later this year.

While Hughes expects the GHG targets not to be weakened, he also advises against the impulse to toughen them in the run-up to the 2023 review.

"I think the levels of ambition in the strategy now are adequate," he said.

I think now the focus should just be on implementation.

"I think now the focus should just be on implementation.

"To me that's a challenging enough ambition, and it would require the global introduction of alternative fuels and technologies to do that."

Last year a group of shipping industry bodies came together to suggest imposing a $2/mt levy on bunker fuel sales to build a $5 billion fund to spend on researching new decarbonisation technologies for the shipping industry.

The proposal has yet to be discussed at the IMO's Marine Environment Protection Committee, but Hughes said it could send a message about shipping's commitment to its GHG reduction strategy.

"It's an important signal from the industry to say, we want to achieve this, but we can't do it without money to invest in R&D," he said.

"And the structure of shipping is such that it's going to be very difficult for individual countries to come forward with significant funds to invest in technology for shipping."

Sitting Out the Storm

But for now, Hughes suggested the disruption to shipping in the wake of the COVID-19 pandemic will kick thinking about the GHG agenda into the long grass for much of the industry.

It's a question of companies sitting and saying, how resilient are we?

"Many companies, particularly now, will be looking at the short term, thinking we need to consolidate our position and make sure we're just doing what we can," he said.

"It's a question of companies sitting and saying, how resilient are we?

"And if part of your strategy is to move towards alternative fuels and say, these are going to make us more resilient in future, then you would be willing to take those investment risks.

"But I'd suggest by far the majority of companies aren't going to be doing that; they'll essentially be sitting out this current storm and just keeping doing what they've been doing already."