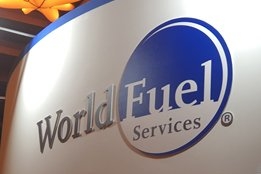 But again, the marine segment increased its profitability, generating a first quarter gross profit of $35 million, an increase of $4 million or 13% year-over-year.

As the company has discussed at length, the decline in volumes - and corresponding rise in profitability - is a result of its decision to exit "certain low margin business activities in Asia."

Having had the strategy in place for over two years, CFO Ira Birns says the process is now almost complete and he does not anticipate volumes falling much further.

"I would hope - no guarantees - that we kind of bottomed out in the first quarter. I don't expect that volume number to grow materially in the second quarter," he said during the firm's earnings call.

"The low-hanging fruit has been called, there's always going to be opportunities to identify more of that, but hopefully, replacing that going forward, more than on a one-to-one basis…[and] we think we're going to start seeing some uplift in volume over the course of the year."

Oil Prices Dip Again Due To Perception Of Stalled Demand

However, traffic jams have resumed in Europe and Asia.