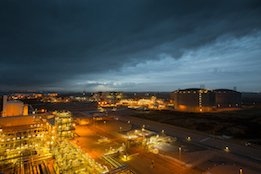 Skangas today announced that it has signed a Letter of Intent (LOI) with National Grid Grain LNG to source liquefied natural gas (LNG) at the import terminal on Isle of Grain, UK for the purpose of reloading and bunkering small vessels.

Grain LNG, which currently operates as a primarily large-scale import terminal, is said to be "firmly committed" to the development of an LNG break bulk marine facility for small vessels.

The company will extend the facility's existing jetties to accommodate LNG carriers of up to 20,000 cubic metres (cbm), meeting the needs of Skangas' fleet of LNG carriers in the process.

"We believe the best way to encourage growth in the market is to offer competitive alternatives which ensure security of supply for small scale market participants" said Nicola Duffin, Senior Commercial Manager at Grain LNG.

"Grain LNG is excited to be at the forefront of developing this market in partnership with progressive companies such as Skangas."

The company will extend the facility's existing jetties to accommodate LNG carriers of up to 20,000 cbm

With the signing of the LOI, Skangas is said to have become the first small-scale LNG supplier to enter into such an agreement with a UK-based import terminal.

"Skangas appreciates the opportunity to source LNG from the Grain LNG terminal," said Dan Hramoff, Director of Business Development and Projects at Skangas.

"This will improve supply to the small scale markets thus allowing to source LNG on more flexible and competitive terms. In the end, it will be reflected in improved offerings to our own LNG customers."

Singapore and Rotterdam Work Together on 'Green and Digital Corridor'

The Port of Rotterdam and Singapore's Maritime and Port Authority have signed a memorandum of understanding to work together on alternative fuel supply and digitalisation.

Under the deal Hapag-Lloyd will allocate the emissions savings from its use of biofuels to 18,000 TEU of DHL's shipment volumes.

Marsoft and ClimeCo join forces to expand scope of market.