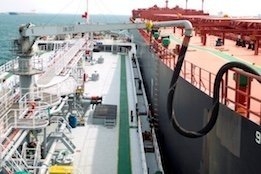 More bunker markets should follow Singapore's lead in tackling bunkering malpractice and trying to clean up the industry, according to Peter Grünwaldt, VP at Hafnia Management and their Head of Bunkers.

While recent media reports have been particularly critical of malpractice in the ARA market, Grünwaldt says it would be a mistake to think problems are limited to only this market.

"ARA is the second biggest market in the world, and consequently comes up on the radar amongst the buyers more frequently than many other places. But I think the industry as a whole needs to look for smarter solutions to an apparent problem," he told Ship & Bunker.

"We have seen the initiatives having a positive effect in Singapore, although the system probably isn't perfect there either yet. Maybe we could all learn from that?"

So what exactly is Singapore doing that needs to be replicated?

Licensing is not enough on its own. It can only work if there's a strong system behind it.

Firstly, every supplier in Singapore must hold a supplier's licence issued by the Maritime and Port Authority of Singapore (MPA). Secondly, the use of mass flow meters (MFMs) for bunkering MFO is mandatory, a requirement that will soon extend to distillates too. Finally, it has a clear set of standards that authorities are able and willing to enforce.

For example, MPA has shown several times it is willing to immediately revoke the licence of a supplier for any serious violation of the rules. MPA has also shown it will deny the renewal the of a licence if a supplier's accumulative performance is below the required standard.

"I know that some port authorities have said there is no need to mandate the use of MFM because suppliers are already free to use them at will, and maybe there are other options out there that could be used," says Grünwaldt.

"But while we would like to buy more from MFM equipped suppliers in many other ports than Singapore, we would need to have full confidence in the equipment. For that an established framework that sets and maintains standards for their calibration and use is needed. This could include penalties for malpractice too.

"Licensing is not enough on its own. It can only work if there's a strong system behind it."

Suppliers are, of course, only one part of the bunker transaction chain and Grünwaldt fully acknowledges the behaviour of the buyers is also part of the solution towards a more healthy market.

"There are too many buyers looking only for the lowest price, putting the suppliers under pressure to sometimes 'cut corners'. So in a way we, as buyers, have created these issues ourselves. Of course, we constantly have to ask ourselves if we are doing enough to support those who are doing the right thing. But right now we have little confidence in paying extra for the bunkers will get us what we want. Consequently nothing is really moving," he says.

"This is where the need for technology and a strong enforcement framework comes in. Buyers should recognize that suppliers need to make money. And if buyers have confidence they are operating within a properly regulated system we should then be able to find a happy medium on price.

"All we want as Buyers is a fair price and the assurance that the product is delivered in a timely and trustworthy fashion - without all the fuss. In reality I'm sure the majority of suppliers wants the same. Do a job, make some money and not spend so much time on all the negatives. A more transparent and efficient market should help us all to move in the right direction. Whether the answer is MFM, Blockchain, increased legislation or a combination of a lot of things, I don't know.

"Fact is we're still doing bunkers in most ports like it was done 40 years ago."

However, the current Iraq skirmish is dismissed as irrelevant to crude.

An environmental body labelling VLSFO blends 'Frankenstein fuels' is the latest evidence of fights over marine fuels getting more emotive.

Heavy distillate and residue stocks lost 11% to 10.45 million barrels in the week to Monday.