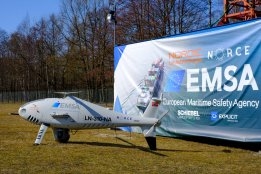 The European Maritime Safety Agency is set to launch a large-scale sulfur emissions monitoring campaign in the Baltic using drones.

The organisation, in conjunction with the Federal Maritime and Hydrographic Agency, will launch a three-month deployment of a remotely piloted aircraft in the Baltic later this month, it said in a statement on its website on Wednesday.

The drone will measure the sulfur content in the exhaust plumes of ships in the region to check for compliance with the 0.10% limit in the area.

The results will be made available in real time to responsible authorities at European ports.

Evidence taken from the drone would not be directly used to prosecute ship operators for non-compliance, but could be used to prompt port state control checks of ships' fuel to determine whether they are using non-compliant bunkers.

The drone will be operated by Norway's Nordic Unmanned, with sensor technology and emissions analysis supplied by Denmark's Explicit ApS.

Three barges in particular -- the Maximus, the Atticus and the Amelia -- are named in the circular as being covered by the ban.