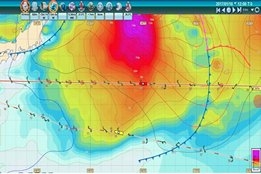 With the need to reduce bunker consumption, and their associated emissions, firmly back on ship operators' minds, StormGeo has highlighted the potential savings weather routing can provide.

The voyage from Balboa to Ningbo was undertaken by a chemical tanker carrying bulk liquid chemical cargoes and the savings were calculated in relation to the captain's intended route.

At 9212.4 NM, StormGeo's route was nearly 400 NM longer than the route originally envisage by the captain, but buy placing the vessel to the south of heavier swells generated by northern Pacific Ocean storm centres, the steaming time at sea was reduced by 33 hours, the company explained.

The scale of the investment shows other ports looking at making MFMs mandatory may need deep pockets.