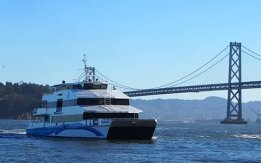 The decision follows successful tests by California's Golden Gate Ferry, which has been testing renewable diesel in mtu engines in six of its ferries since 2019. Image Credit: Rolls-Royce Power Systems

Engineering company Rolls-Royce Power Systems is set to certify some of its key engine products to run on alternative fuels from next year.

The firm expects to certify its new generation of Series 2000 and 4000 mtu marine engines to run on second-generation biofuels and some synthetic fuels from the beginning of 2023, it said in a statement on its website on Wednesday.

The decision follows successful tests by California's Golden Gate Ferry, which has been testing renewable diesel in mtu engines in six of its ferries since 2019.

"There is already a lot of interest now from many customers in the marine industry who want to improve their carbon footprint, particularly with hydrotreated vegetable oil (HVO)," Denise Kurtulus, Vice President Global Marine at Rolls-Royce Power Systems, said in the statement.

The ship made its final voyage running on diesel from Belgium to the Holland Shipyards Group facility in Werkendam this week.

The cartel may agree to lower output to better align prices with fundamentals.

The engine is intended to be the firm's first to run on ammonia bunkers.