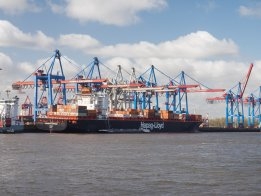 Hapag-Lloyd saw a steep rise in bunker prices in the first half. File Image / Pixabay

Hapag-Lloyd, soon reportedly set to take over from AP Moller-Maersk as the world's largest container line, saw its first-half bunker consumption jump by 2.9% on the year.

The firm used about 2.11 million mt of marine fuels in the first half of 2021, up from 2.05 million mt a year earlier, it said in financial results released on Thursday.

Bunker consumption per slot climbed to 2.41 mt/TEU from 2.35 mt/TEU a year earlier.

The company paid an average of $462/mt for its bunkers in the first half, up from $311/mt a year earlier.

"Compared with the prior year period, the rise in the average freight rate and the decrease in the average bunker consumption price in particular had a positive impact on Hapag-Lloyd's earnings in the first half of the 2021 financial year," Hapag-Lloyd said in the statement.

"Ongoing operational challenges in connection with congestion of port and hinterland infrastructures as well as local COVID-19 restrictions led to capacity bottlenecks and had a negative impact on the half-year result."

The company is looking for candidates with fluent English and a proven record in planning, prioritising and delivering against a given budget.

The firm, along with Siemens Energy, Toyota Tsusho and Associated British Ports, has won matched funding from the UK's Clean Marine Demonstration Competition for the project.

The two firms will seek to develop Djibouti as a competitive alternative to other ports in the region.