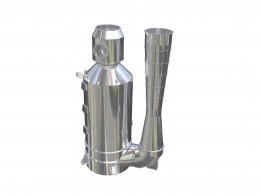 Demand for Finnish engineering company Wärtsilä's scrubbers predictably declined in the fourth quarter of last year from "exceptionally high" levels a year earlier, according to its CEO.

"Demand for scrubbers declined from exceptionally high levels in the previous year, as a result of uncertainty related to the price and availability of bunker fuels," CEO Jaako Eskola said in a statement Thursday.

In general Eskola said the company was still "pleased" with the level of orders for its marine business last year, with particularly high activity in cruise vessels and gas carriers.

But the company expects soft demand for the marine business this year, saying "low vessel contracting is expected to affect equipment ordering activity."

A drop in scrubber orders in the fourth quarter may have reflected shipowners wanting to see the levels of fuel availability and pricing once the 1 January deadline for the International Maritime Organization's new sulfur limit passed.

The widely reported long delays for scrubber installations also meant there was little incentive to order units in Q4.

There were also reports in the fourth quarter that some shipowners were putting off scrubber retrofits to take advantage of high freight rates.

The broker was arrested on Saturday on suspicion of arranging more than 35 transfers totalling 18,000 mt of MDO.