New EU Moves Against Scrubbers Could Ultimately Help Them: CSA 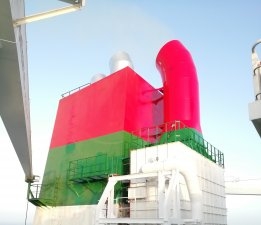 Scrubber advocate body the Clean Shipping Alliance (CSA) is taking an optimistic attitude to renewed efforts in the European Union to make life harder for owners of the emissions-cleaning systems, saying they may end up being supportive in the long run.

On Thursday the European Parliament's Transport Committee agreed a draft resolution on maritime transport calling for a gradual phase-out of the use of heavy fuel oil in ships. The only international ships legally still using HSFO are the ones with scrubbers equipped, and this would mean phasing out these systems over time.

The parliament's role in this is advisory, and it would be for the European Commission to decide whether to implement the measure.

The CSA published a statement in response to the committee's move last week. Poul Woodall, the organisation's executive director, suggested that the committee's call for an impact assessment as part of the move would end up demonstrating scrubbers' effectiveness and winning over more companies to the technology.

"Years of testing, analyses and operations have shown that these exhaust gas cleaning systems provide a significant improvement in shipping's air emissions quality without any negative impact on the marine environment," Woodall said.

"[The EU] will need to provide solid scientific and evidence-based arguments to the IMO, the shipping industry and citizens."

The CSA pointed to last year's CE Delft study showing that using scrubbers with HSFO delivers an increase in CO2 emissions of only 1-1.5% versus just using HSFO, compared with a likely increase of 10-15% for MGO versus HSFO because of its increased refining needs.

"To recommend a restriction on the use of EGCS - a technology that is already putting shipping on the right path towards carbon neutrality – with fundamentally no supporting scientific evidence is only halting the progress we have made so far," Woodall said.

Owners of scrubber-equipped tonnage had a tough year in 2020, with new installations of the equipment slowing significantly as the price spreads that make them profitable collapsed along with the crude oil price.

At Rotterdam the VLSFO-HSFO price spread went from $298/mt at the end of 2019 to as little as $26.50/mt in April 2020, according to Ship & Bunker pricing, while a spread of at least $100/mt is thought to be needed to make installing the systems look attractive.

As well as reduced interest from shipowners in scrubbers, this narrowing spread also led to reduced attention from regulators. Talk of open-loop scrubber bans was widespread at the end of 2019 ahead of the IMO 2020 transition, but quickly dissipated after the first quarter of 2020 as the change in prices moved shipping companies' attention elsewhere.

But in 2021 the steady recovery of the global economy is slowly restoring oil markets to where they had been expected to be in 2020 before the COVID-19 pandemic, and this is bringing renewed interest in scrubbers. The VLSFO-HSFO spread at Rotterdam stood at $101/mt on Monday, compared with $80.50/mt at the end of 2020.

The challenge for the scrubber industry and its supporters will now be to reassert the technology's environmental credentials as regulators and campaigners return to criticising it.

IMO 2020 compliant fuels have been in use for over a year, largely without incident. So why the continued vilification? IBIA's Unni Einemo lays out the facts.

GAC plans to upgrade its fleet to cut emissions.