ONE Open to Multiple Options for IMO 2020 Compliance 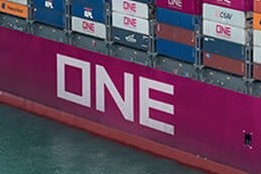 ONE sees the use of hybrid fuels as the go-to choice for 2020. Image Credit: ONE

Ocean Network Express (ONE) says it has not ruled out any of they key compliance options for the upcoming global 0.50% sulfur cap on marine fuel, but the use of hybrid fuels will be its go-to choice when the new rule comes into force from January 1, 2020.

"ONE's container vessels are equipped to adopt low-sulphur compliant hybrid oil without requiring special modification. At current, we identified this as one of the most realistic and cost-efficient  solutions, to enable ONE to be compliant ready by 1 January 2020," ONE said in a 2020 primer released Monday.

"We are in discussion with bunker suppliers for specifications."

As for using scrubbers and continuing to burn HSFO, ONE says a retrofit could take more than one month to complete, meaning a long idling time, while the lead time for building a scrubber equipped vessel could be two to three years.

As such it does not see these as options for compliance by 2020, but will consider it as a possible "next phase."

it takes several months to transit from non-compliant fuel

ONE is also evaluating whether to charter vessels with scrubber systems.

The third major option for shipowners is switching to liquefied natural gas (LNG) bunkers, and like scrubbers, ONE says building a new LNG-powered vessel would take two to three years so is not an initial compliance option.

Still, the carrier remains open to the idea of using the alternative fuel.

"Although our LNG powered vessel deployment plan is not concrete at this moment, evaluation is underway where development of LNG bunkering environment is being further analysed," it says.

For those making the switch to complaint fuel, which is expected to be some 90% of the world fleet, a key point of debate is when to make the switch to be ready on deadline day.

"Although the regulation takes effect only from 1 Jan 2020, ONE will start complying with the regulation before the effective date kicks in as it takes several months to transit from non-compliant fuel," ONE says.

"We are reviewing details of the regulation during this period to ensure full compliance and will timely announce updates."

The company is looking for candidates with three to five years of experience in a similar position.

Johannessen is set to join Alfa Laval's energy division as of June 1 with responsibility for business development in fuel cells and energy storage.