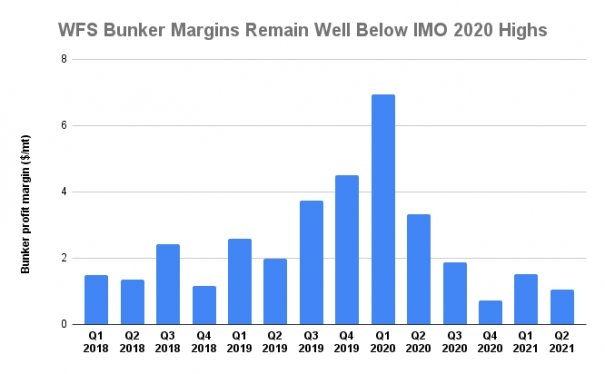 The company's bunker margins are unlikely to return to the highs of early 2020 any time soon. Image Credit: Ship & Bunker / Data Credit: WFS

Fuel supplier World Fuel Services saw its bunker margins drop on a yearly basis in the second quarter, while its volumes jumped from the level seen at the lows of the COVID-19 crisis in 2020.

The company reported net profit of $4.8 million from its marine division in the second quarter of 2021, down by 64% from the $13.3 million seen a year earlier, it said in quarterly results released late on Thursday.

"Marine's a tough one; it's a competitive marketplace and money is cheap," Ira Birns, chief financial officer at WFS, said in a call with analysts on Thursday.

"There's a lot of people going after the same customers, but we still have a leadership position around the world."

The company had benefited from volatility in bunker prices in the first and second quarters of 2020, with companies taking on price risk management services to counter it. Margins are unlikely to return to the elevated levels seen then without a return to that level of volatility, Birns said.

"As you look to the future, the opportunities come from heightened volatility, which would improve that piece of the business, and a rebound in a market like cruise," he said.

The firm expects margins to remain roughly at the level seen in Q2 for the rest of 2020.

But CEO Michael Kasbar gave a more optimistic summary of the state of the marine business, pointing out the health of most of the shipping industry.

"Most sectors within the marine industry are performing well," he said.

"The container segment is especially buoyant, dry bulk is strong, tankers are looking more positive over time and the cruise market is slowly entering restart mode.

"Although the marine business continues to perform well, it's been impacted by the lack of volatility and the correlated reduction in demand for risk management offerings."

The company is paying an average of $3.13 million per VLCC scrubber installation.

MARITEC: Update on Chemical Contaminants in Fuels From ARA Region

Since the last alert on Chemical Contaminants in Fuels from ARA Region (Amsterdam, Rotterdam & Antwerp), CTI-Maritec has kept a close watch on the fuel quality in the region.

The ship tested the fuel on a seven-day cruise visiting Hamburg, Southampton, Le Havre and Zeebrugge.