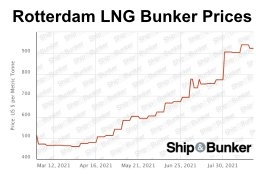 However, local LNG bunker supplier Titan LNG says the recent rise is expected to be a temporary phenomenon.

"It is important to understand that although prices are currently very high, it will not affect the business case for LNG-fueled vessels as prices are expected to drop in the future. The recent legislation to add shipping under the European Union Emissions Trading System (ETS) gradually from 2023, is yet another factor that supports the decision to run on LNG." Flip Dankelman, Risk Manager, Titan LNG, told Ship & Bunker.

In Europe and especially in NW Europe, we are still lacking behind with filling up our gas storages compared to previous years

In response to the rising TTF price, on August 2 LNG bunker prices in Rotterdam took a notable jump of $131/mt to $906/mt based on an underlying local price of EUR763/mt, according to Ship & Bunker data published in collaboration with Titan LNG.

Since then, LNG bunkers in Rotterdam hit a high of $940/mt before falling back this week to $923/mt - or $743/mt and $778/mt in terms of fuel oil and MGO equivalent pricing respectively.

"In Europe and especially in NW Europe, we are still lacking behind with filling up our gas storages compared to previous years; gas storages are 5.5% behind after previous cold winters and 26.5% behind after warm winters. This lack of storage injections has given the TTF price significant support for quite some time already," Dankelman explained.

Low gas supply levels, caused by factors including unexpected maintenance at Norwegian gas fields in the North Sea and within Russian gas production facilities, have also been a driver for the rise.

Moreover, low gas supply levels from Russia to supply Europe through Ukraine, a situation seen by some as temporary political wrangling as part of Gazprom's new Nord Stream II pipeline, together with high gas demand in Asia, have further spurred high LNG prices.

The city-state's total demand fell to 3.9 million mt in September.

The company is celebrating 50 years since its first deal of fuel oil to a customer in Trinidad.