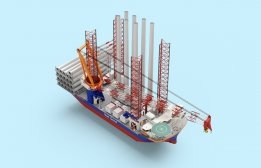 As well as being able to run on methanol, the ship will be equipped with a 5,000 kWh battery pack. Image Credit: Van Oord

The ship is due for delivery in 2024 and will be capable of installing wind turbines of up to 20 MW in capacity, the company said in a statement on its website last week.

As well as being able to run on methanol, the ship will be equipped with a 5,000 kWh battery pack.

"Van Oord is committed to reducing CO2 emissions and to becoming carbon-neutral by 2050, in line with the Paris Agreement," the company said in the statement.

"This investment is an example of the energy transition within the company."

The ship will be built at the Yantai CIMC Raffles Shipyard in China.

Said to be the world-first marine trial of carbon-neutral synthetic natural gas (SNG).

The CIT-E Ferry is designed to be operated in inner-city waterways for 8-14 hours.