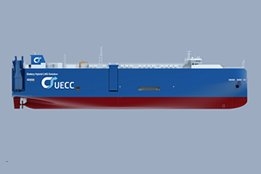 United European Car Carriers (UECC) says its plans for two new generation pure car truck carriers (PCTC) that use a hybrid of battery of LNG power will allow them to go beyond IMO's target for a 40% reduction in carbon intensity by 2030.

"This is a giant leap towards decarbonization, and unlike anything else that has been done previously in our industry, I believe, and something that we are extremely proud of," says UECC's CEO, Glenn Edvardsen.

The first vessel is planned for delivery in 2021.

While there is still considerable debate as to what the well-to-wake CO2 savings of LNG bunkers actually are, UECC's Head of Ship Management, Jan Thore Foss, says by its calculations the LNG part of its solution will reduce CO2 emissions by about 25%.

UECC says it also plans to use carbon neutral and synthetic fuels as part of its future fuel mix.

The group is a coalition of companies, governments and other interested parties seeking to develop zero-emission vessel designs.

Proven experience, network and successful history from the industry is a must for anyone applying.