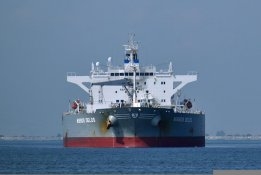 The new assessments will show the cost of carbon dioxide emissions from the fuel used to transport crude or fuel oil on an aframax tanker via an initial four European shipping routes.

The assessments will start from the beginning August, the company said.

Platts has been publishing freight carbon intensity values since October.

In addition, they show the cost of offsetting those emissions using carbon credits on a per barrel of crude basis.

The new carbon-accounted aframax freight assessments show the cost of EU emissions allowances required to comply with the EU emissions trading system for some of the key tanker routes supplying Europe. They will be published in Worldscale points and in $ per metric tonne, according to the company.

The firm has chartered the 11,000 TEU container ship YM Trillion from Shoei Kisen Kaisha and took delivery of the new ship on Wednesday.

Carbon Ridge Inc has raised $6 million it its latest funding round.

Alfa Laval to Launch Ammonia Bunker Tests From Next Year