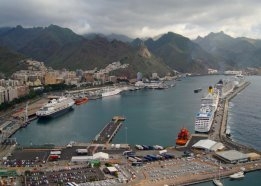 A subsidiary of Spanish gas firm Enagas is set to order an LNG bunker barge for the Canary Islands market.

Enagas-owned Scale Gas has been awarded EUR 15 million of funding from the Spanish Ministry of Transport, Mobility and Urban Agenda to support the vessel's construction, the company said in a statement on its website on Thursday.

The vessel will have 12,500 m3 of capacity, and is expected to be operational from June 2025. Construction is planned to begin from June of next year.

The barge will be also suitable for retrofit to supplying ammonia as a marine fuel at a later date.

"LNG is an energy that will play a key role in the energy transition to advance zero emission alternatives in maritime transport, as the European Union points out in its FuelEU Maritime regulation, especially at a time like the current one when there is no economically viable zero emission driving technology," the company said in the statement.

Oil Nosedives As Analysts Have Second Thoughts About China Recovery

Meanwhile, the U.S. reports trouble in the oil patch.

The firm has hired a team of 10 tanker brokers in Madrid that previously worked for Medco Shipbrokers SL.