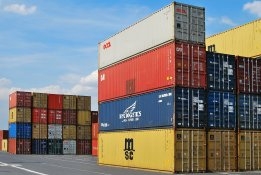 Container shipping giant AP Moller-Maersk has halted spot bookings of some its services in response to last week's blockage of the Suez Canal, warning of disruption for 'weeks to come'.

"We have earlier communicated that even when reopened, the blockage of the Suez Canal would have ripple effects on global supply chains for weeks to come," the company said in a note to customers on its website on Tuesday.

"We are doing our utmost to mitigate the impact and minimise the total impact of our customers' supply chains."

The company is "expecting a significant loss in capacity over multiple weeks, depending on market dynamics," it said.

The 20,000 TEU boxship the Ever Given ran aground in the Suez Canal a week ago, blocking a key chokepoint for the global shipping industry for six days and leaving a backlog of several hundred vessels waiting to traverse the waterway.

Maersk's halt of spot bookings and short-term contracts applies to the following routes, it said:

Carbon Clean will capture carbon dioxide emission from an industrial site near the Liquid Wind facility, supplying them for combination with hydrogen to create green methanol.