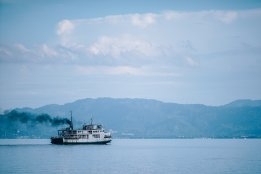 Capturing ships' carbon emissions at source may be one route to decarbonisation. File Image / Pixabay

Shipping company K Line has reported success in a trial of carbon capture and storage technology on board one of its bulkers.

The firm recently successfully separated and captured carbon dioxide at more than 99.99% purity from the exhaust of its coal carrier the Corona Utility, it said in a statement on its website on Wednesday. The trial was carried out in conjunction with Mitsubishi Shipbuilding Co and ClassNK.

"Experts from Mitsubishi Shipbuilding were onboard the vessel to operate, maintain the plant, and instruct the ship's crew how to operate, as well as measured, analyzed the captured CO2 and evaluated the system performance," K Line said in the statement.

"From mid-September, the ship's crew has been conducting the operation, measurement and maintaining the plant, and will continue to evaluate the safety and operability of the CO2 capture plant in order to sort out the issues to be considered and conduct research and development for future commercialization."

The company did not reveal what percentage of the ship's carbon emissions were captured during the trial.

The firm recently successfully separated and captured carbon dioxide at more than 99.99% purity from one of its ships.