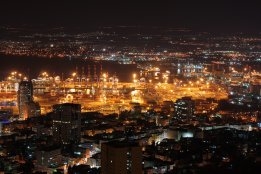 A first cargo of fuel oil that conforms with the International Maritime Organisation's (IMO) new 0.50% sulfur rule has been loaded from the Haifa-based refinery in Israel, Reuters reports.

A cargo of 30,000 metric tonnes of ultra low sulfur, 380 centistoke blend, fuel oil was loaded from the 197,000 barrels a day in late May, the report said citing industry sources.

The move puts Israel's Oil Refineries together with other companies that have started to produce the IMO-compliant product.

In April, Chinese refiner Sinopec loaded its first cargo of the the new bunker fuel.

IMO's Fourth Greenhouse Gas Study is On Schedule Despite Coronavirus

The study is due to be published towards the end of this year.

Total bunker demand at the Turkish port has slipped to just under 200,000 mt/month so far this year, down from around 250,000 mt/month two years ago.