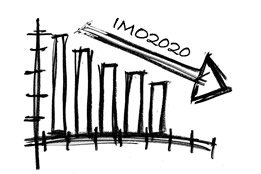 In recent months, the upcoming IMO 2020 rule has increasing found itself a talking point among those traditionally unconcerned with the bunker and shipping industries, and with that there has been a growing sense of panic over what the new rule will mean.

That was in no greater evidence than this week in a new report by respected analyst Philip K. Verleger, who predicts the new global 0.50% sulfur cap for marine fuel could trigger nothing short of an economic collapse. Should that happen, it will prompt a global review of the new regs.

"If nothing changes, the 2020 diesel and gasoil crisis will occur because as many as half of world refineries cannot produce fuel that meets the new regulation," he said in the report released this week.

While vessels have several choices for compliance, including fitting a scrubber and continuing to burn the same HSFO they do today, the vast majority of vessels are set to switch to low sulfur distillate fuels or VLSFO blends for compliance.

the global economy is moving steadily toward a crisis yet unseen by most, if not all, key individuals in policy positions

"The economic collapse I predict will occur because the world's petroleum industry lacks the capacity needed to supply additional low-sulfur fuel to the shipping industry while meeting the requirements of existing customers such as farmers, truckers, railroads, and heavy equipment operators," the report states.

As a number of prominent industry voices have already said, Verleger notes the fact that even if they wanted too, it is too late for refineries to make meaningful investments in time for the new cap.

"ExxonMobil is also considering additional investment in its Singapore refinery to produce diesel fuel that satisfies the IMO 0.5-percent cap. It will be of no use in 2020, though, because the final investment decision will not be made until 2019, and, if the project goes forward, the facility will not be ready before 2022, two years after the IMO rule becomes effective," he wrote in the report.

But while gasoil and low-sulfur diesel prices "must rise significantly when the IMO 2020 rule takes effect," Verleger believes this in itself will not lead to a major recession.

Rather, it will be brought about by a significant increase in the price of crude, particularly sweet crudes that afford the production of large quantities of low-sulfur diesel.

"The IMO regulation on marine-fuel sulfur content, if left unchanged, will likely have widespread impacts on the petroleum sector. Crude oil prices could rise to $160 per barrel or higher as the rule takes effect, assuming no market disruptions. Prices could rise much higher with any disruption, even a moderate one. The higher prices will slow economic growth. If they breach $200 per barrel, they would likely lead to a recession or worse," Verleger writes in the report.

"The risk of high prices and an attendant economic downturn should force government policymakers across the globe to review the IMO 2020 issue. As of this writing, though, on July 1, 2018, no such reviews are being conducted. Instead, the global economy is moving steadily toward a crisis yet unseen by most, if not all, key individuals in policy positions. Soon it will be too late to act. Very high prices and recession await."

The IMO has repeatedly said there will be no turning back on the January 1, 2020 start date for the new sulfur cap.