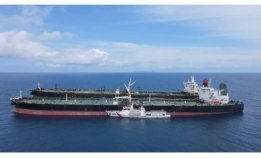 The Indonesian authorities have detained two VLCCs suspected of carrying out illegal transfers of fuel oil.

The Iranian-flagged Horse and the Panama-flagged Freya were detained on Sunday, the Indonesian Maritime Security Agency said in a statement on its website.

The ships were suspected of "carrying out ship-to-ship illegal fuel transfers, not raising the national flag, shutting down AIS", the authority said, adding that the Freya is suspected of spilling some oil.

The company's average retrofit time was about 20 days.

The country's government has now been forced to close all of its Mediterranean beaches to the public.