Report Identifies Areas Most at Risk from Ammonia Bunker Spill 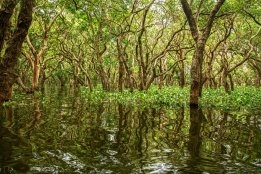 Mangroves were one habitat found to be particularly sensitive to potential ammonia spills. File Image / Pixabay

New research has been published examining the potential environmental impact of using ammonia as a marine fuel.

The researchers looked at ammonia bunker spill scenarios during bunkering and collisions across a variety of habitats, times of day, weather and other conditions.

Estuaries, mangroves and wetlands would be particularly sensitive to ammonia spills, more than polar regions and the deep sea, the researchers found. Fish would be the most sensitive to these spills, rather than birds or mammals.

"Examining the impact of ammonia is a challenge because of the vast conditions a ship might face while at sea or even when bunkered," Lauren Dawson, senior consultant for water and environment at Ricardo, said in the statement.

"Critical factors to consider include the various ship and storage types, the underlying principles which determine the fate of ammonia in the environment, and the diversity of aquatic habitats and species that could be affected.

"Ultimately, what we found is that ammonia is more threatening to fish species, and particularly to ecosystems with less saline water and higher temperatures.

"It is therefore important to study the impact of ammonia carefully for particular regions where these habitats intersect with major shipping channels and ports, such as the Strait of Malacca.

"The findings of the report provide an excellent step forward to delivering a baseline upon which future assessments can be refined."

Ammonia is widely expected to take up a significant share of the marine energy mix in future decades because of its lack of carbon content, but further research and development work into how it can be safely handled and bunkered at sea will be needed first.

The Port of Rotterdam plans to carry out its first trial ammonia bunkering in 2024.

The firm is looking for candidates with at least two or three years of experience in administration or the shipping industry.

"All future inquiries and work will be from Orion Bunkers DMCC," Zishan Arshad, Director Bunkers, has told Ship & Bunker.

The organisation estimates European gas-powered ships could be consuming more than 6.3 million mt of LNG by 2030.