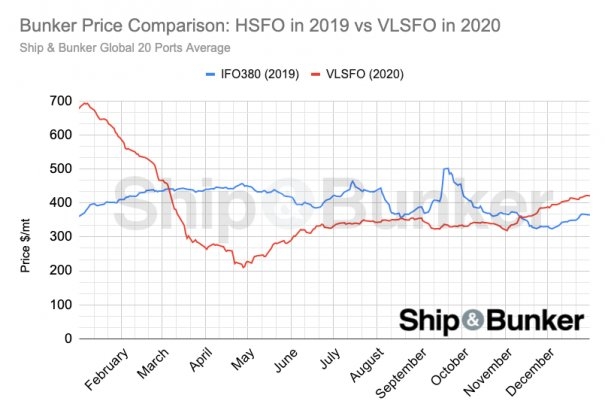 A dramatic slowing of the global economy this year as a result of the coronavirus pandemic has ensured the previously predicted 20% to 40% increase in bunker costs due to IMO 2020 has failed to materialize.

Instead, while the global bunker market in 2020 saw a considerably wider spread of prices than in 2019, overall prices during the last year were 7% lower than the preceding year, according to data from Ship & Bunker.

The analysis takes into account that prior to the January 1, 2020 introduction of the IMO 2020 rule the majority of vessels were lifting HSFO, at which point they switched to burning VLSFO for 2020 and beyond.

But the squeeze on both logistics and demand caused by IMO 2020 prompted VLSFO prices at the start of the year to be much higher, with the index hitting a high of $694/mt on January 6.

With the latest analysis suggesting oil will continue to head higher next year, a repeat of lower prices seems unlikely for 2021.

With Goldman now indicating Brent will average $65/bbl for 2021, it suggests we could well see the return of $600/mt+ bunkers next year.

Shum Chum has resigned as executive director as of December 24.