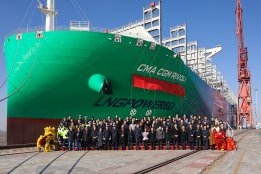 The global LNG bunker market will receive a sharp boost in the first half of this year as French container line CMA CGM receives four more of its giant new gas-powered vessels.

Hudong-Zhonghua Shipbuilding held a naming ceremony for one of the new 23,000 TEU ships -- the CMA CGM Rivoli -- on January 8, the company said in a statement on its website Monday.

CMA CGM took delivery of its first of a series of nine of the ships late last year, and another four are expected to join its fleet in the first half of 2021, the shipbuilder said.

The ships will be among the largest vessels in the world, and will add significantly to global LNG bunker demand as they enter service. In the first bunkering of the CMA CGM Jacques Saadé at Rotterdam in November the ship took on 17,300 m3 of LNG, compared with total LNG bunker sales of 48,623 m3 at the port overall in the third quarter.