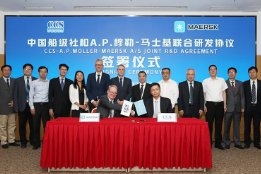 A.P. Moller-Maersk said it will explore "green fuels" as part of an expanded cooperation agreement with China Classification Society (CCS).

The announcement today comes as the pair said they have signed three separate new cooperation framework agreements covering the development of carbon-neutral technologies and standards.

"Maersk has set a clear and ambitious goal to become carbon neutral by 2050. China, as a globally leading maritime and shipbuilding nation, will be a crucial partner towards ensuring that our industry will be able to respond effectively to the climate change challenge," said Jens Eskelund, Managing Director of Maersk China Limited.

The agreements mainly focus on scientific and technological innovation projects, life-cycle green fuel availability and infrastructure, as well as design for carbon-neutral vessels, Maersk said in a press release.

"Maersk and CCS already have an established partnership. The extension of cooperation to research of green fuels and vessel development is adding a new and exciting dimension to our partnership," said Ole Graa Jakobsen, Head of Maersk fleet technology.

Today's development is just the latest in a string of environmentally focused recent moves by Maersk.

Last week it was announced the box shipping giant had taken a minority stake in Silicon Valley-based electrofuels startup Prometheus Fuels as part of efforts to decarbonise its marine operations, while earlier in the month it invested in bio-methanol start-up WasteFuel.

Perhaps most notably, this year Maersk has taken a lead on the ordering of methanol-fuelled box ships.

The company is looking for candidates with a degree in finance, accounting, economics business or a related area.

The company has ordered two hybrid-electric bunker tankers for harbour operations in Singapore.

The firm launched the operation at the start of last month and is now ready to expand it.