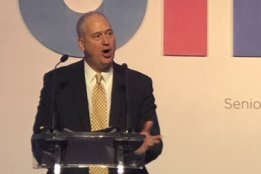 ExxonMobil today addressed one of the major industry concerns heading into 2020, namely, compatibility issues between the different 0.50% sulfur fuels expected to come onto the market in response to the new 0.50% sulfur cap on marine fuel.

Confirming a number of additional details today for its own IMO 2020 product range, ExxonMobil says its various fuel offerings will be compatible with each other no matter the region where they are lifted.

"We're extremely proud of what we're doing here, which is responding to the needs of our customers," Luca Volta, Marine Fuels Venture Manager, ExxonMobil, told Ship & Bunker in comments made alongside today's announcement.

"Compatibility is of course a relative, so with a 90%/10% mix there is no problem, and 80%/20% might need some very minor onboard handling adjustments. Beyond that, as today with any fuel oil, we would not advise this mixing of the fuels."

Broadly speaking there are too bookends when you talk about fuels: Aromatic and paraffinic... Our proprietary technology finds the balance between these characteristics

Volta says that its new 0.50% sulfur fuels range leverages knowledge from developing its HDME 50 emissions control area (ECA) fuel, a "heavy distillate" or hybrid fuel in nature, but are very different as the IMO 2020 products are true residual fuels.

"Broadly speaking there are too bookends when you talk about fuels: Aromatic and paraffinic. Aromatics are more compatible, you can mix them but they don't burn as well. Paraffinic fuels you can not mix as much but they burn better. Our proprietary technology finds the balance between these characteristics," Volta explained to Ship & Bunker.

The fuels will be sold against the ISO 8217:2017 specification, which amongst other things means a maximum of 60 ppm for cat fines.

Indeed, quality was a key message in today's announcement, with Volta stressing that significant effort has been put into making sure the IMO 2020 fuels are fit for purpose.

"With so many new grades being developed ahead of the sulfur cap implementation, compatibility is rightly a concern for the industry. However, operators can be assured that ExxonMobil's new compliant fuels will be fully compatible with each other as long as crews follow our best practice guidance for bunkering, handling and storage."

Prior to the January 1, 2020 start date for the new sulfur cap, the 0.50% sulfur fuels will be available in Antwerp, Rotterdam, Genoa, and Marseilles in Europe, along with Singapore, Laem Chabang in Thailand, and Hong Kong.

Additional locations, including in North America, as well as additional products will be announced later in this year.

Another key question for IMO 2020 is whether there will be enough compliant product to satisfy demand.

And while Volta said ExxonMobil did not discuss its manufacturing capabilities, he confirmed they have already been in discussions with customers over potential supply deals.

Oil Hits The $80s Over Energy Crunch Fears, But Some Analysts Warn Of Correction