Steep Drop-Off for Scrubber Uptake in Container Segment in 2021 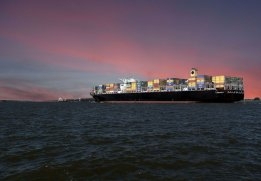 The uptake of scrubbers in container shipping appears to be slowing rapidly, with installations in the first half of 2021 at less than a third of the level seen a year earlier.

"Optimism over the economic viability of scrubbers has diminished somewhat since the early days of the sulphur regulations, although ultimately predictions of a total 1,000 ships by the end of 2022 may not be far off the mark," Alphaliner said in its weekly newsletter.

"While a scrubber equipped vessel was added to the fleet at a rate of one every ten hours in December 2019 just prior to the introduction of the regulations, that ratio fell to one every two days in the first half of 2021."

The spread between VLSFO and HSFO -- a measure of the profitability of the emissions-cleaning systems -- has dropped below $100/mt at Rotterdam this week. The spread stood at $97/mt on Wednesday, according to Ship & Bunker pricing, down from $123.50/mt a month earlier.

But the main culprit for the slowdown in scrubber installations is likely to be the current abnormal strength in the container market. With spot freight rates surging, liners are likely to continue straining to keep as much capacity as possible operational. Some pent-up demand for scrubber installations is likely to be released once the container market starts to ease again.

A total of 35% of the top ten container lines' capacity is now scrubber-equipped, according to Alphaliner. MSC has the most of the top ten, with 46% of its fleet fitted with the systems.

Container lines are the largest consumers of bunker fuel.

The investment will help California-based WasteFuel to develop biorefineries in Asia and the Americas.

Meanwhile, shale producers will get a break from the banks.