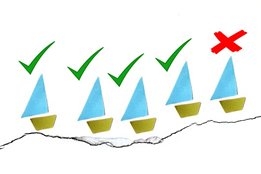 Compliance from 4 out of 5 vessels will be "pretty good". Image Credit: Ship & Bunker / Pixabay

The Shipping industry will be doing "pretty well" if initial compliance with the upcoming IMO2020 rule can hit 80%, so says David Atkinson, principal chemist Parker Kittiwake.

"We'd like to hope everybody complies and pays attention to these rules," he added in comments made to Platts.

What compliance levels will be are still one of the big unknowns of the new 0.50% global sulfur cap, which comes into force on January 1, 2020. Violations will range from accidental to flagrant.

Some of that will be limited to certain transitional issues, as highlighted by Robin Meech, Managing Director, Marine and Energy Consulting Limited, who writing for Ship & Bunker last year argued that high levels of non-compliance was unavoidable due to the complexities of tank cleaning.

But addressing long term, deliberate non-compliance will be down to effective enforcement and meaningful fines, and as Ship & Bunker highlighted last week, it is here that plenty of questions still remain.

There are also no set methods that is accepted or approved for finding sulfur cheats, he added.